Ikaria – the island of the long life

Nedelina Gocheva was born in the island of Ikaria and she is going to show us the hidden gems that only locals know. If you wanna visit this island and do it really like a local – forget about having a plan or programme. Leave the watch behind aside so that can feel the vibe. So, keep calm, relax and take your time to read this article, just like visiting the island, without any stress. 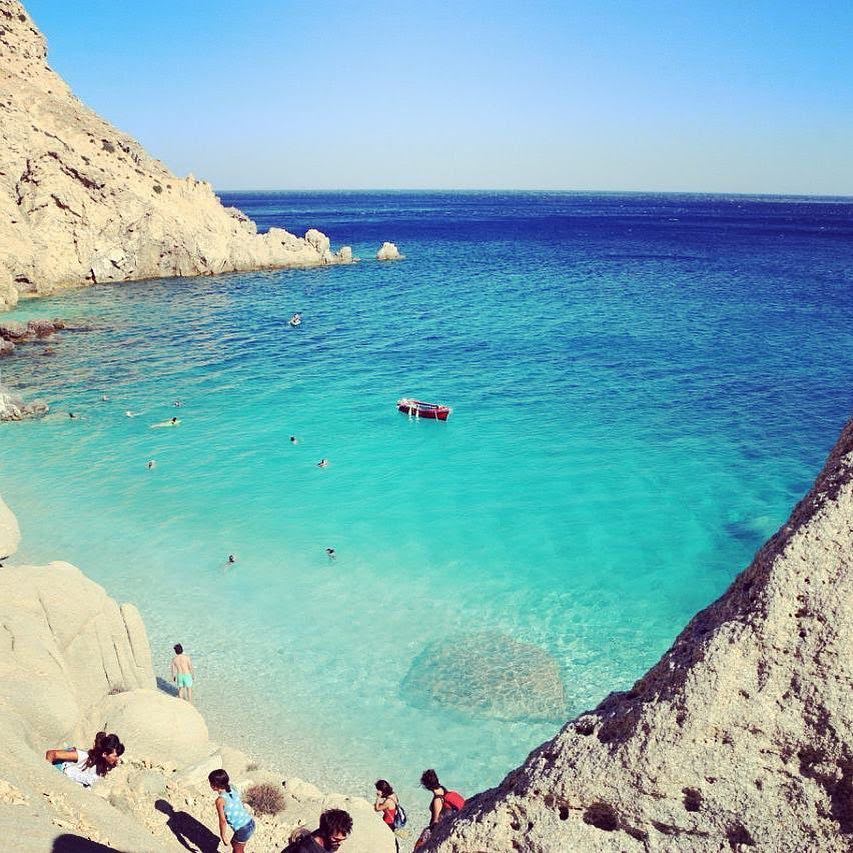 According to the ancient Greek mythology there was a man called Daedalus who was famous craftsman and artist. He invented and built the Labyrinth for King Minos of Crete. Unfortunately, shortly after finishing it, King Minos had Daedalus imprisoned within the labyrinth together with his son Icarus. Trying to find a way out of the labyrinth, Daedalus invented 2 pairs of wings made of wax and gave one pair to his son. He warned him not to fly close to the sun because they could melt. Sadly Icarus did not hear his father’s warnings and he fell around an island. The island took his name and was called Ikaria and the see was named after him as well.. 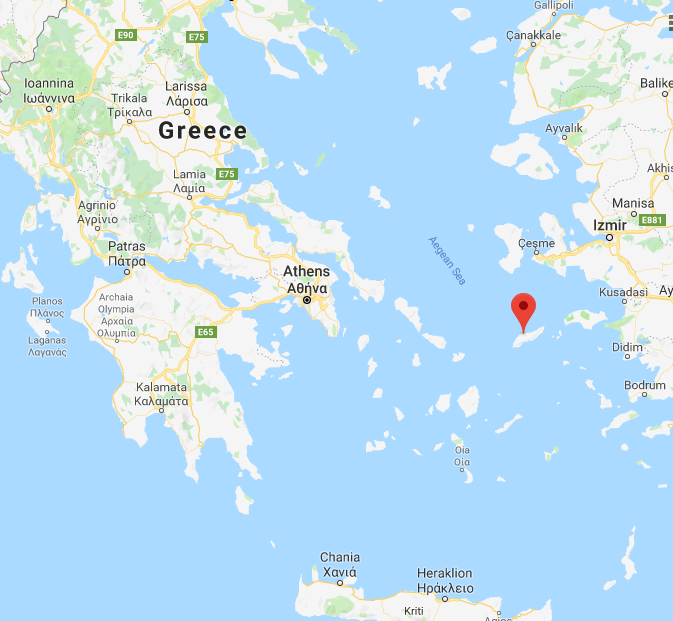 Ikaria map. The island of Ikaria (taken from here)

The island of Ikaria is located southeast from Athens, between the island of Mykonos and Samos. The island is small, but there are 160 km. of coastline which is almost the half of the coastline of Bulgaria (354 km.). The area of Ikaria is 270 square kilometers and the population is about 8000 inhabitants. The island is mostly mountainous and its highest summit is 1,037 metres. Agios Kirykos (Άγιος Κήρυκος) is the island’s capital. The weather in Ikaria is quite windy, especially during the summer period, which is why is a favorite place for the fan of surfs. 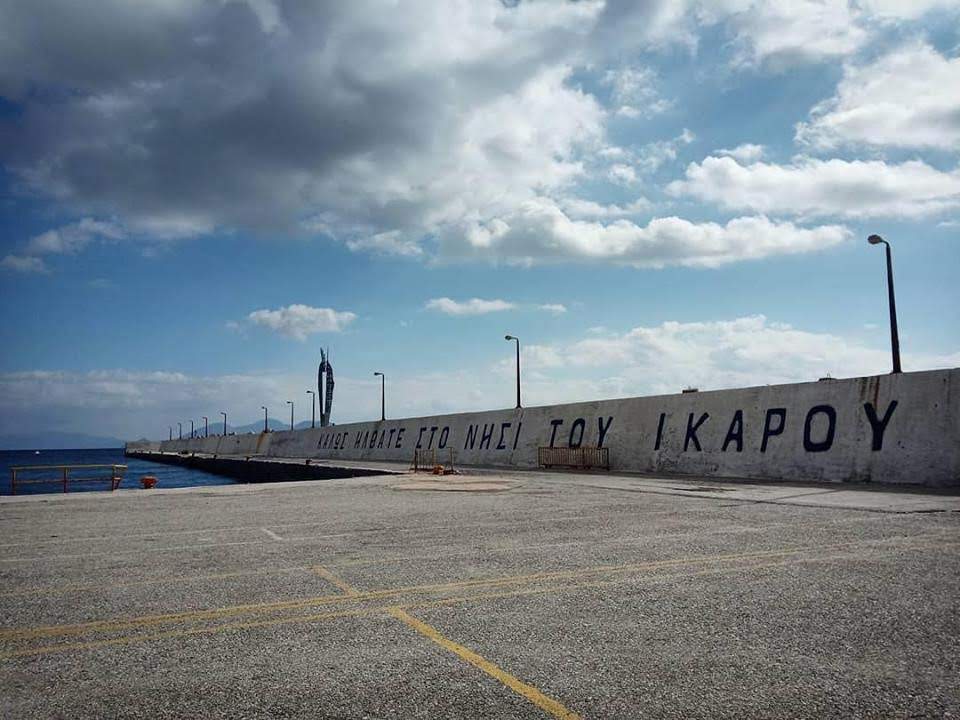 It was a part of the Ottoman Impire, but after the Balkan war in 1912 Ikaria became Greek again. 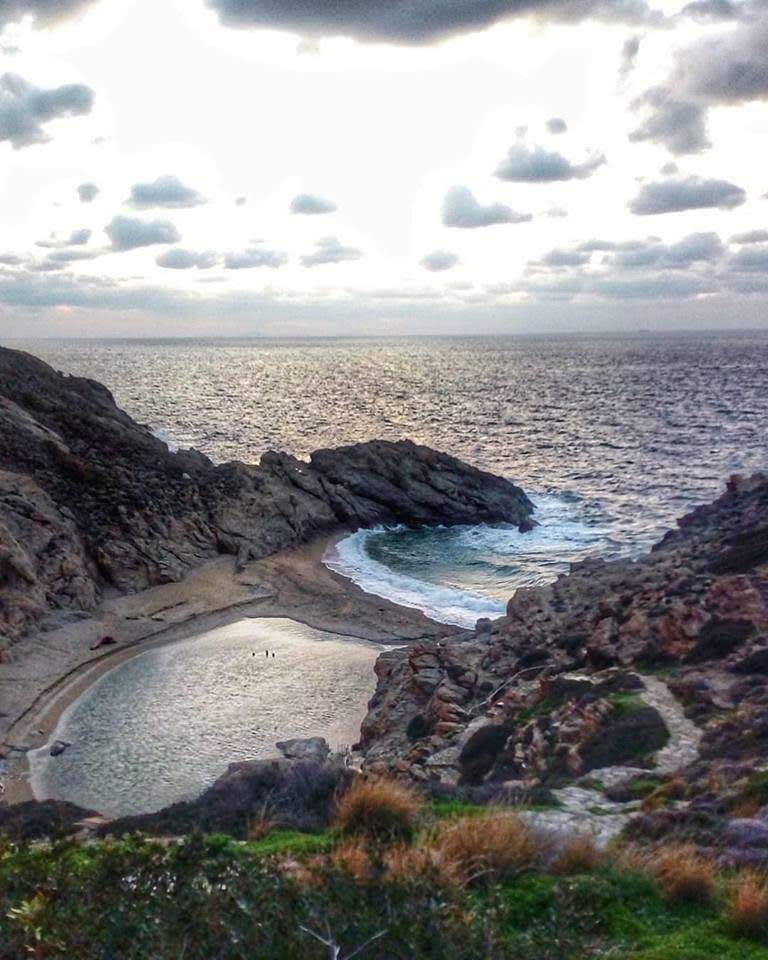 What makes Ikaria an unique place…

Ikaria is from the fifth blue zones in the world where the population lives long live. In practice each person, out of three, on the island lives at least until his nineties. In comparison, the medium length of life in Greece is around 79 years.

The people of Ikaria are not in a hurry and they literally enjoy life. The adults are part of the everyday life of the young people and participate active in it. For example, one could see a woman around 80 years old to drink wine with the young people in the café at 2-3 AM! 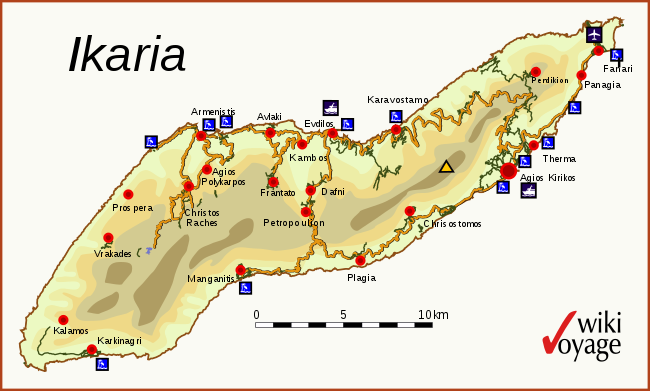 The map of Ikaria is taken from here

Ikaria is famous for its honey that is called “anama” is collected from a special plant, called reiki (ρείκι /Erica manipuliflora), which blossoms during winter. It is considered that this honey is from the best in Greece. 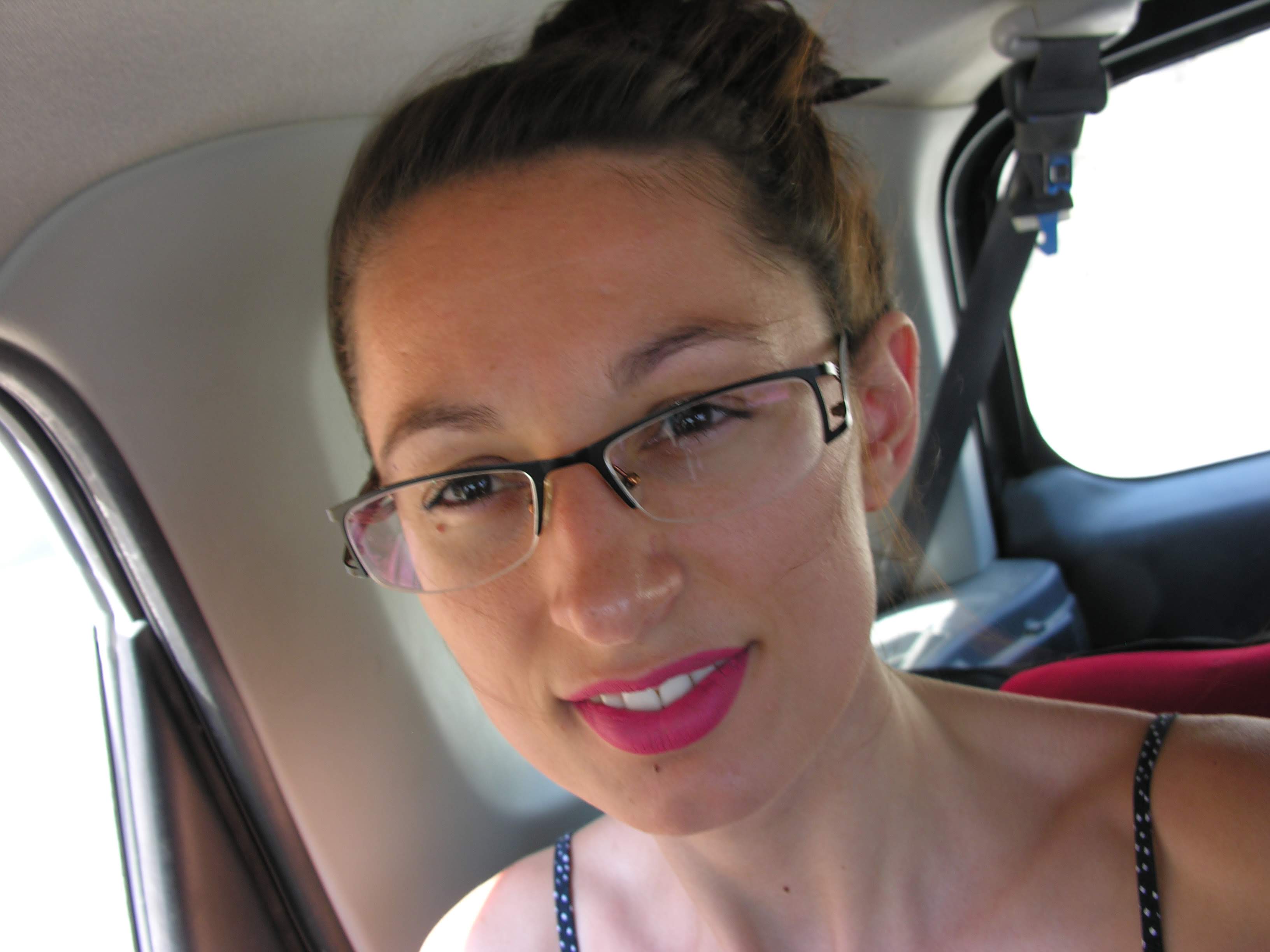 In Ikaria you can see very interesting things like the nature, the customs and the people.

The island is the so called “green” islands of Greece – with beautiful plants and a lot of springs. In one part of the island you can see pine trees, spruces, cedars and variety of other trees. You can find high mountains, rivers, caves and some nice beaches for surfers. This tourist part (north or the northeast part) in which you can find supermarket, pharmacy, or you can rent a car, offers everything you need for your trip as a foreigner. As Ikaria is a small island, it is always obvious that you are a stranger, as the locals know each other. So, when you are not from Ikaria, no matter you are Greek or not, you are a foreigner, but still – a very welcome one. 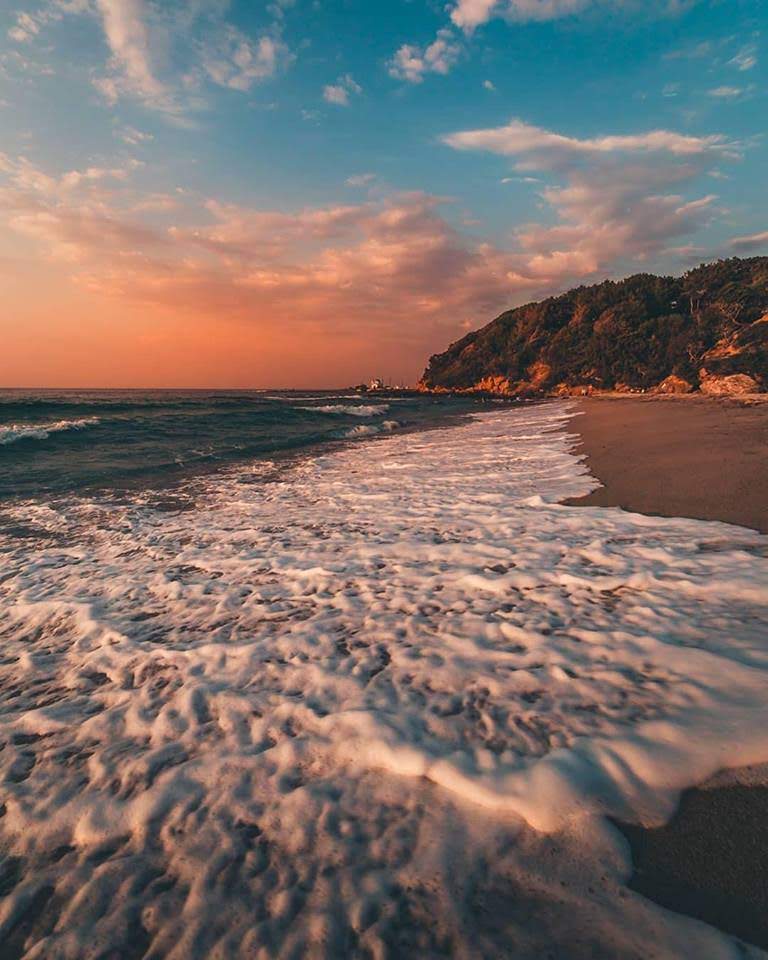 Photo of the beach Messakti (Μεσακτή)

I will tell you about the other part (south or southwest) of the island – this that I love and where I grew up. This is the rocky part. There are plenty of large stones which are as if put there carefully by the giants. It is so out of the beaten track, that you can spot wild goats (called rashko), wild rabbits, quails etc. 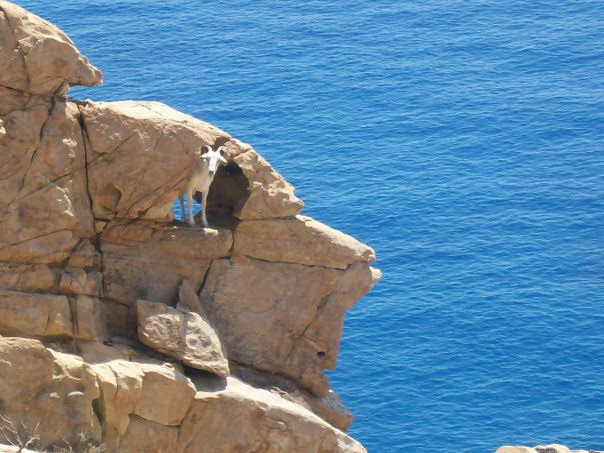 A wild goat near to Karkinagri. One of the specialties of the island is its meat

So, if you are a fan of unspoiled Greek lifestyle and wild nature – this is the right place for you. My home is located in this part of the island and my village is Karkinagri. In Karkinagri you can feel the peace with all your senses. The people are nice and hospitable. The sea is so Greek blue and full of fish. There is no beach but the rocks theirselves are turning into beautiful rocky beach where you can lay on for sunbathing even without a towel. 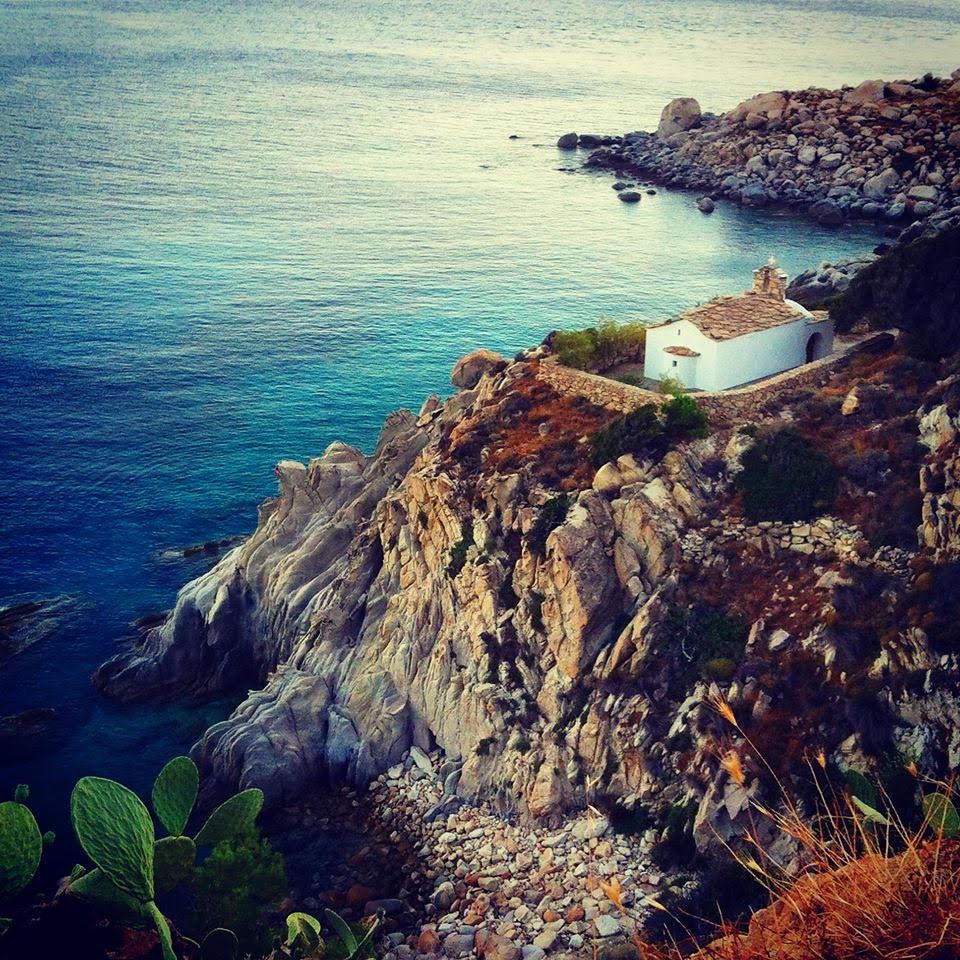 “Panagitsa” – the church devoted to Mother of God near Karkinagri

In this village no matter where you are from, you can always find a company for playing backgammon in the café, to drink a coffee with, to buy ouzo or a glass of traditional red wine and share a meze. The fish is always fresh, as the locals are fisherman. Toula knows how to cook it her the restaurant Karakas. Feel the freedom and when you are still salty from the sea, without any worries, you can go ahead and go for a drink at “Kymata”. If you are lucky, there could be live music, so that you can end up at home on the next morning. No stress, no programme, no burning-out. The time in Karkinagri feels as if has stopped and you really live. 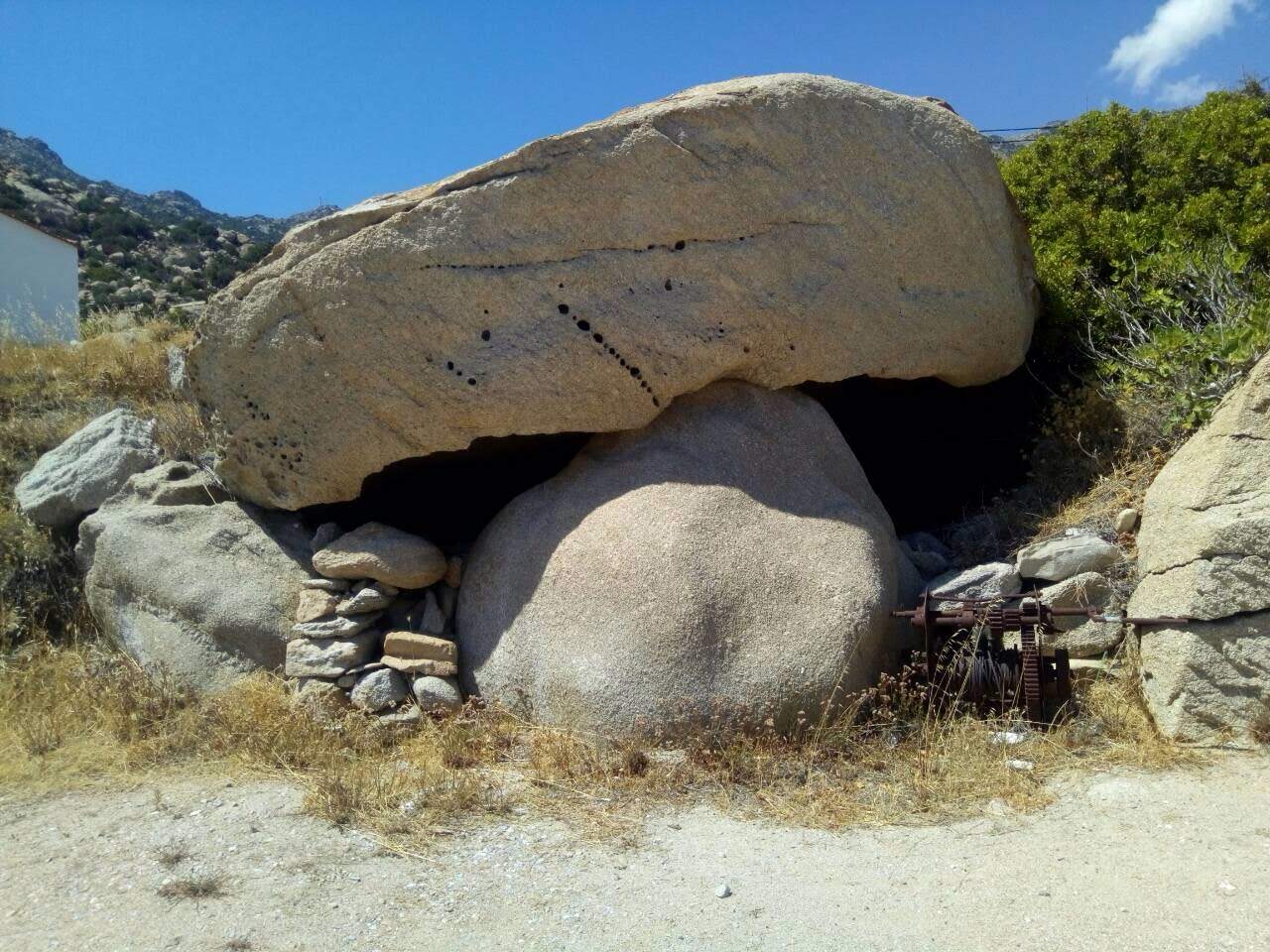 The giant stones in Ikaria (megaliths)

I am really jealous at my close friends that managed to continue their lives at Ikaria, despite the difficulties during the winter period (closed roads because of landslide, days without electricity and internet connection). As for me – Karkinagri will always be my home where I charge my batteries, away from the chaotic life in the city. 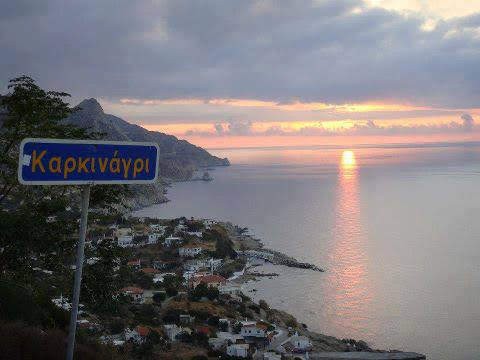 The road to home – Karkinagri

It would be real adventure to visit Karkinagri. Why? The answer is very simple… It would be strange when you see an invitation for a wedding or a baptism on a poster in a shop and you will wonder for whom this invitation is. Finally, you will find out, believe it or not, that it is for everybody even for you. The truth is that in Ikaria the weddings and the baptisms are still open, and the guests that pop up are about 1000 and even more… and all people are really welcome. 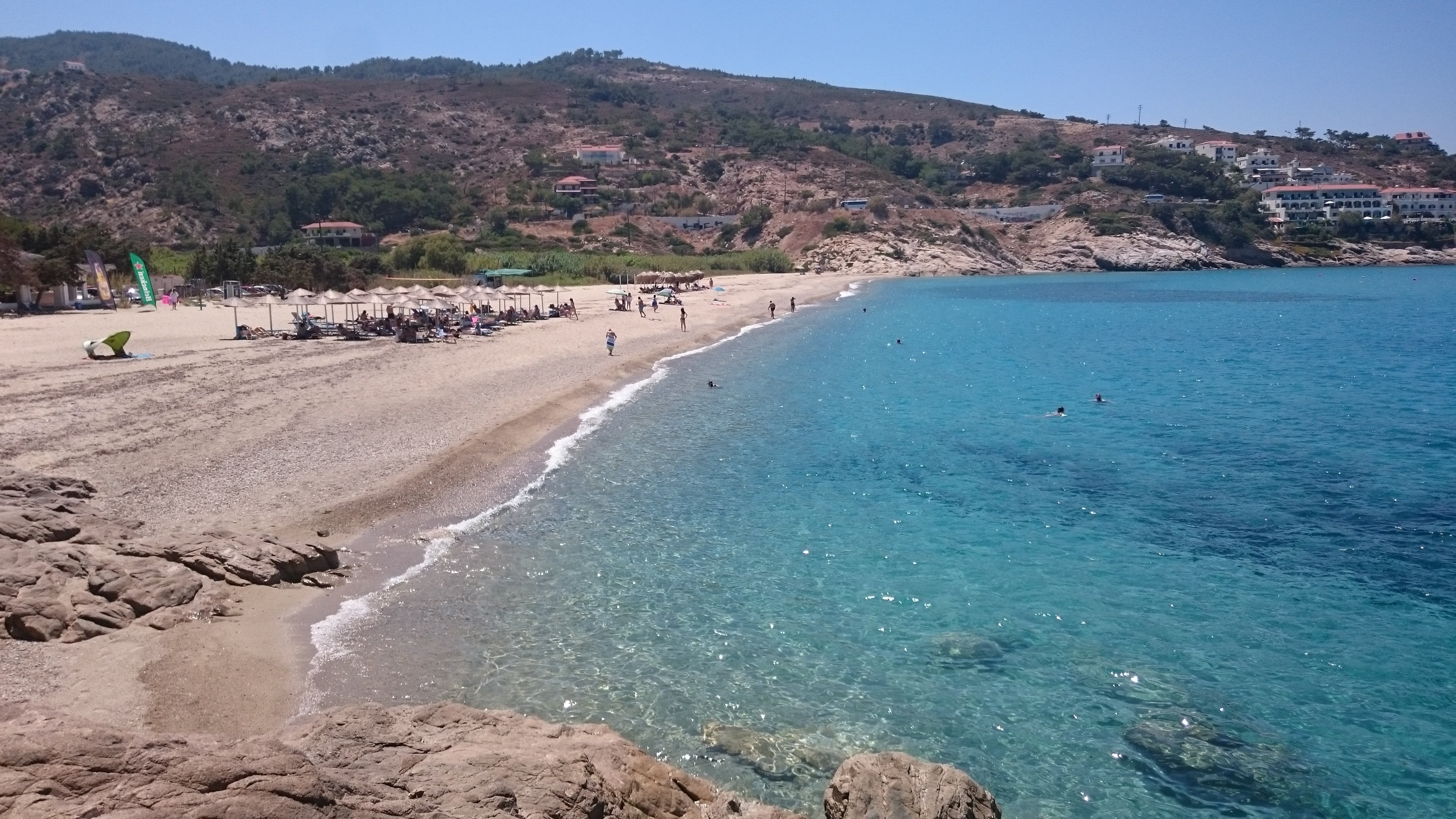 The trade-fairs organized by the locals, are also real attraction. Everybody helps and assists with desire. The products such as meat from kid, the tomatoes and the wine are local and you can buy in very low price, but on the fair the prices are higher. This is because the profit is used for that is required for the village – roads, fountain, support of the church, the port or the school. So don’t be reluctant when you have to pay a bit more for a cause! 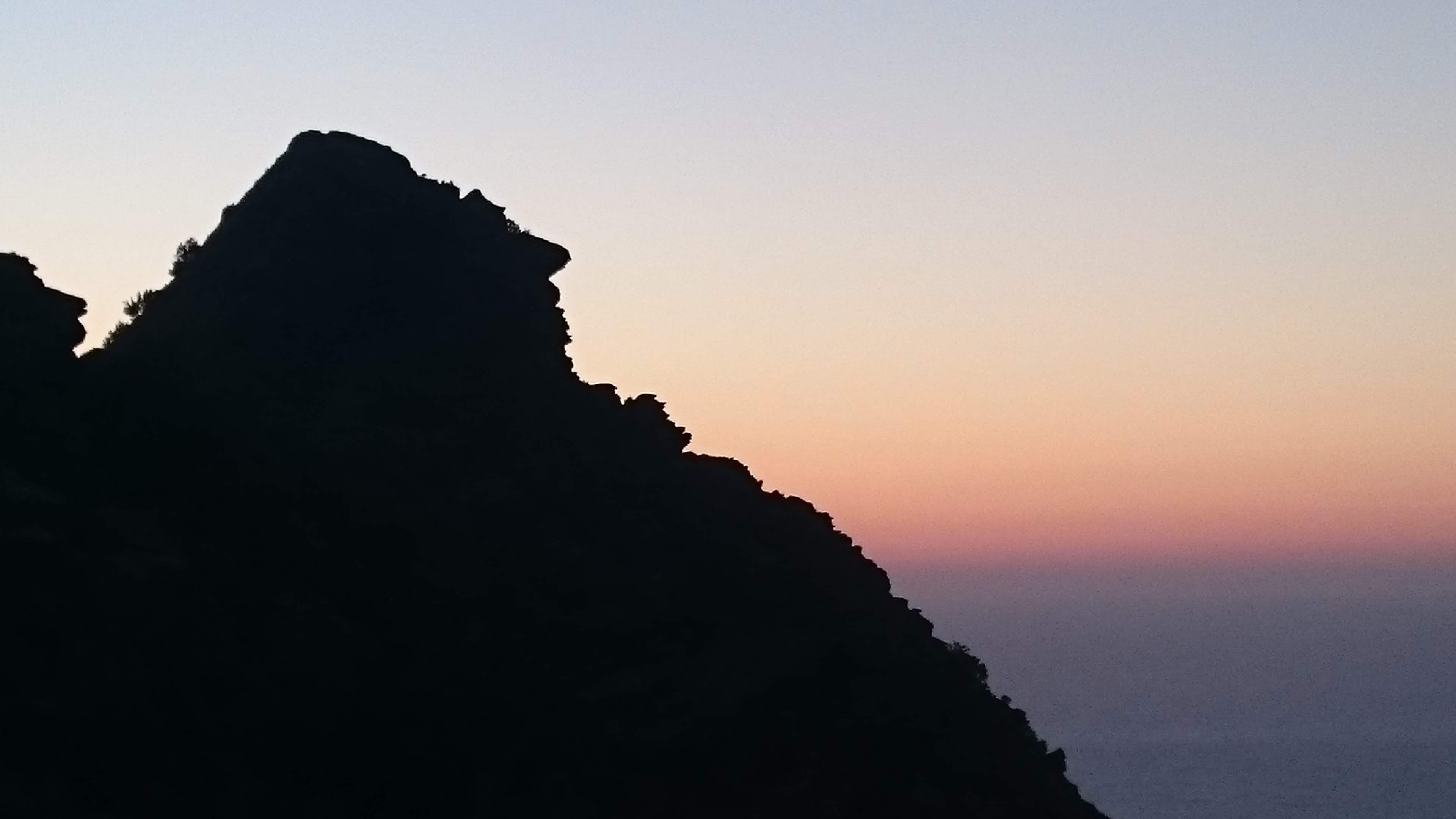 So if you want to visit Ikaria you have to be ready for adventures, including wine-tasting, dancing and enjoying every moment without. Visit the fair of Lagada (Λαγκάδα) on 15th of August! Although my advice is not to have a programme, if you want to be prepared, you can visit the website of Ikaria – https://www.visitikaria.gr/en

Nota Bene: you will fall in love Ikaria or not – there is no middle option! 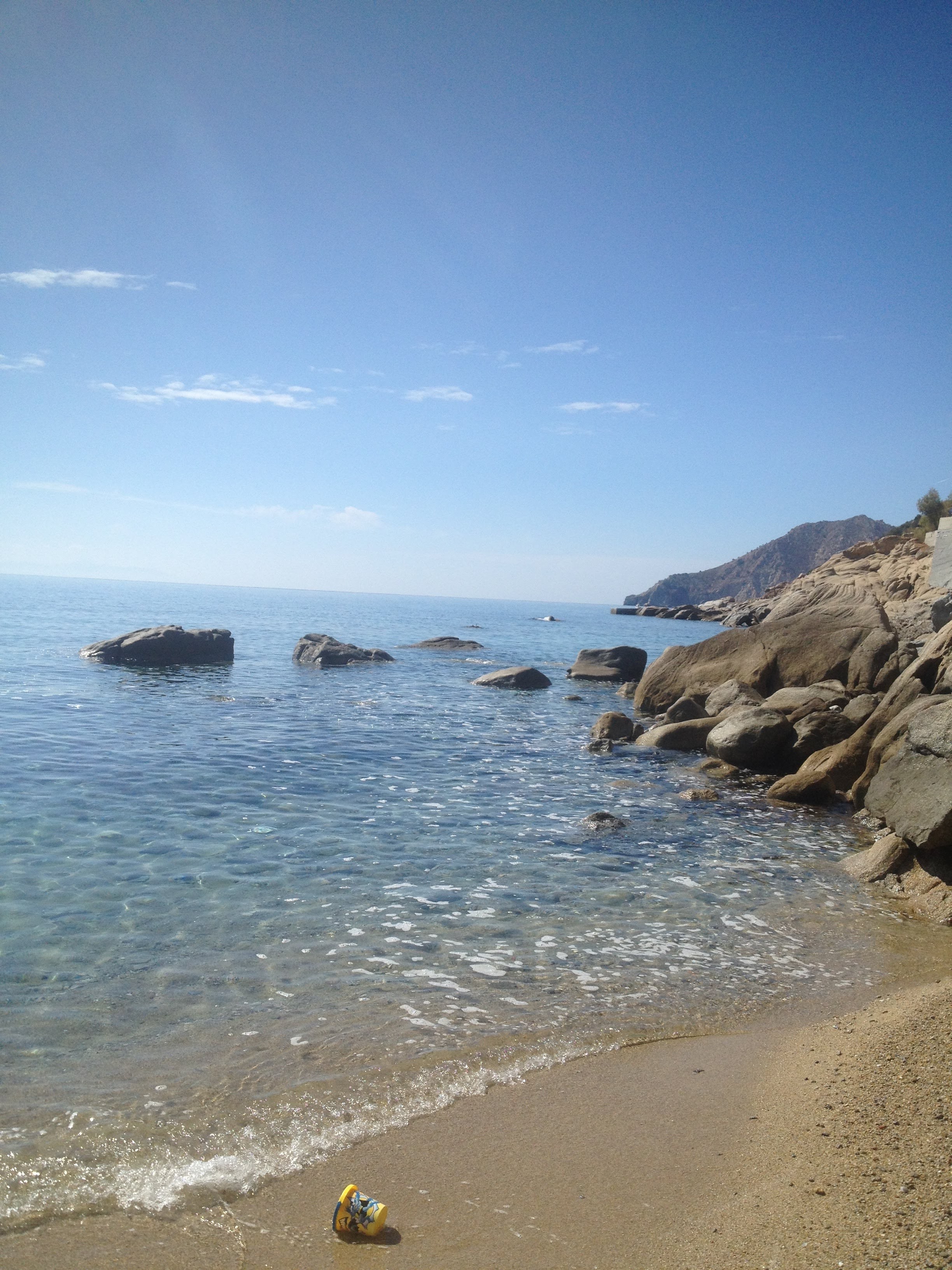 How to get to Ikaria.

P.S. If you consider visiting the island, keep in mind that the airline that flies from Thessaloniki and Athens to Ikaria is Astra-Airlines. If you want to explore the island, the best option is to rent a car.

Translated from Bulgarian by Olympia-academy