In 2019 we kept the tradition to visit one Greek island in October, after the high season. According to us such a trip has big advantages. The main advantages are that there no crowds of tourists and the traffic is not heavy at all. So, if you want to enjoy a peaceful vacation don’t hesitate at all. 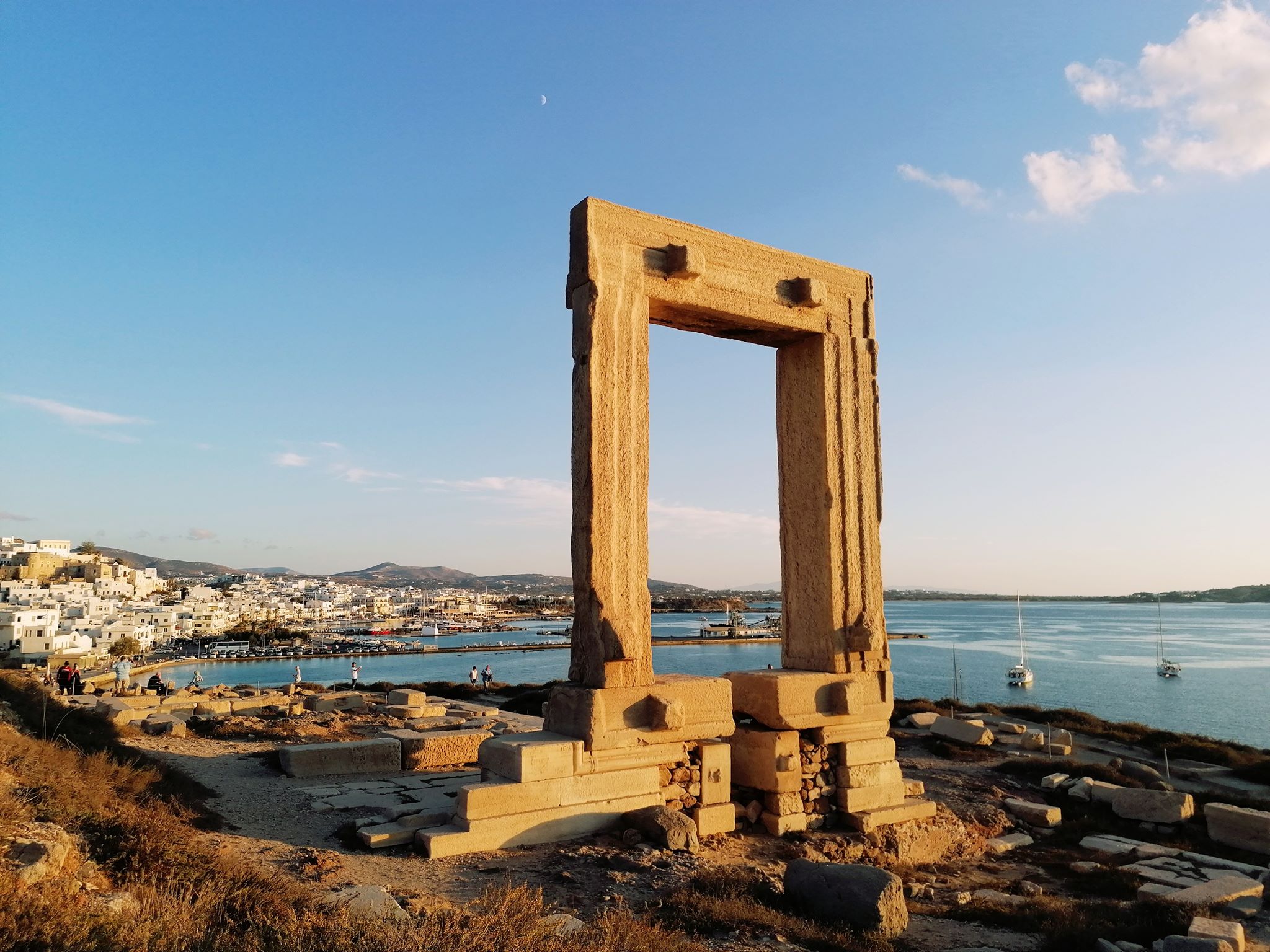 The symbol of Naxos Island – Portara

If you are looking for a cheaper vacation, you are at the right place – the airplane tickets and the hotels are very cheap by this time of the year. The weather is nice, much warmer than other places in Europe and it’s very unlikely to have a rainy day.

Lying on the beach is guaranteed. For me the lack of sharp temperature amplitudes (23-250С in the day and 18-200С in the night) is really comfortable – during the day I can enjoy the warm rays of the sun and the water is still good for swimming and in the evening I can have walks on the beach with a light overcoat. The only disadvantage is that the days in October are shorter but the magnificent sunsets are completely worth it. 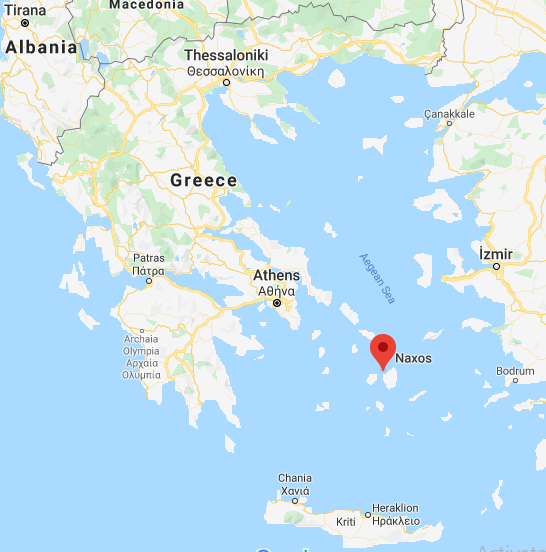 Where is Naxos? The map is taken from here

How to get to Naxos?

We organized our trip to Naxos 6 months earlier – in April. We chose to fly with Aegean Airlines as the prices of their tickets were really good and the schedule of the flight was really convenient – the plane took off from Sofia at 11:00 a.m., then there was a 3-hour stay at Athens Airport and after that the flight to Naxos took only 40 minutes. 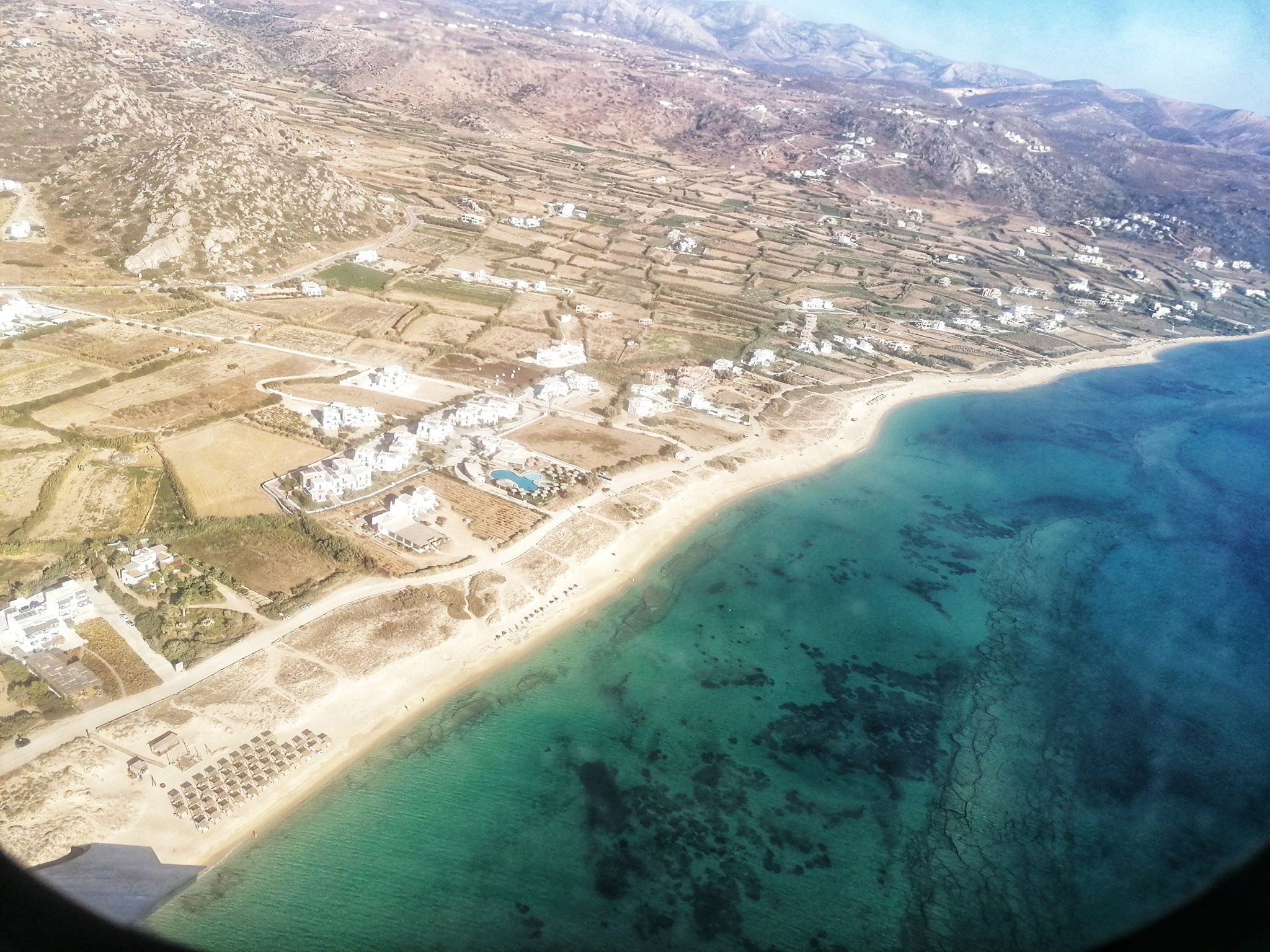 Naxos will enchant you right away

On our way back we took off from the island at 5 p.m. and landed in Sofia at 10 p.m. A couple of times we’ve used Ryanair for our trips to the islands, with a transfer at Athens, but the hours for the flights were quite inconvenient (at least – for us). Especially the morning flight to Sofia – because of it each and every time we had to stay the night at Athens and then to organize a transfer to the airport very early in the morning. And all of this makes the whole trip more expensive. I always book hotels via Booking and I wasn’t disappointed again – I found a really good offer. 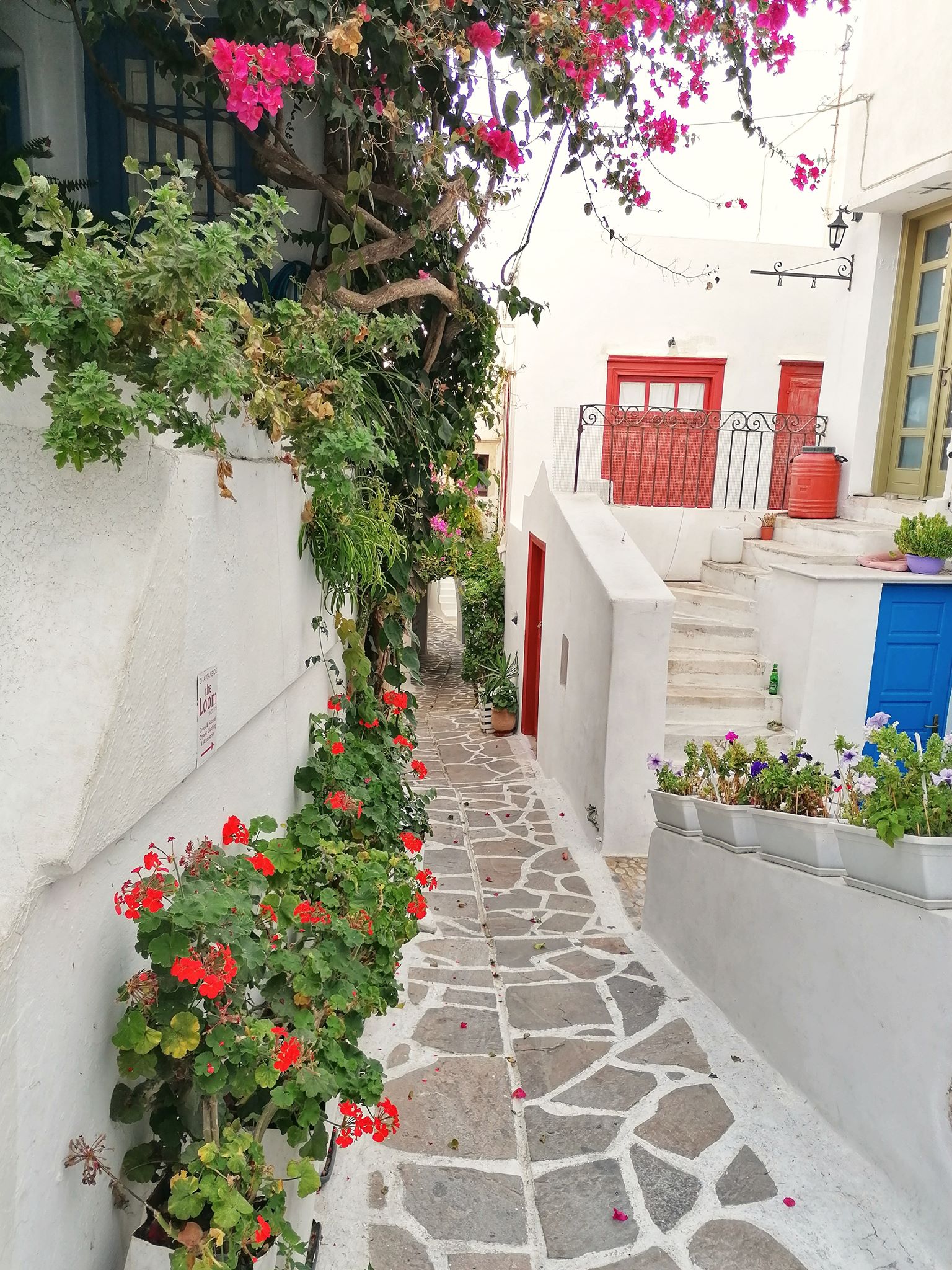 A few words about Naxos

Naxos is located almost at the heart of the Aegean Sea and belongs to the Cycladic archipelago which consists of more than 200 islands. 33 of them are inhabited. Naxos is the biggest and the greenest, with area of more than 430 sq.km. and more than 100 km coastline. The highest peak of the Cyclades is here – Zas, having the same name as this of the mountain where it is situated, with more than 1003 meters. Even though Naxos is in the shadow of its famous neighbors – Mykonos and Santorini, the interest towards it growing in the past few years.

Map of Naxos taken from here

This picturesque island can offer diverse and exciting experience for any taste – wonderful sandy beaches with crystal clear sea, pretty mountain villages, citrus gardens and olive forests, Venetian towers and ancient ruins, delicious Mediterranean food, kind and polite people. And the Greek mythology adds a hint of romance and mystery. The legend says that Zeus himself grew up here, and the ancient Greek hero Theseus left on the island Ariadne, the daughter of king Minos, after killing the Minotaur on Crete. 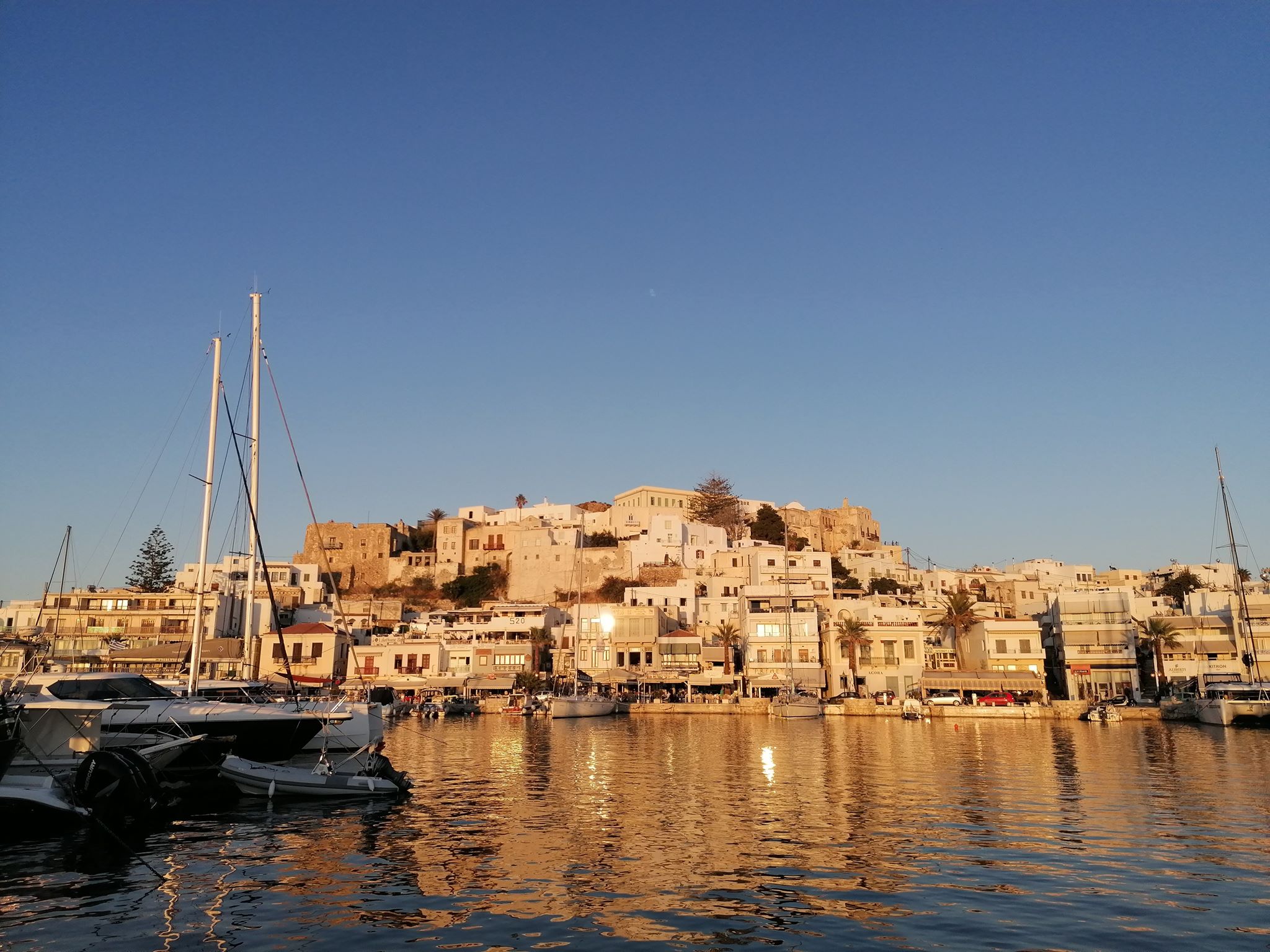 How to get to Naxos?

You can reach the island by plane or by ferryboat. The flights from Athens are usually done with small planes (with less than 100 seats) so it’s better to plan your trip earlier. The Apollon Airport is about 3 km away from the Naxos’ capital. There are ferryboats departing from Athens everyday (from the harbors of Piraeus and Rafina) and the trip takes from 4 to 6 hours. Naxos has very good ferryboat connections with the nearby islands – Paros, Santorini, and Mykonos. The local company – Express Skopelitis – has routes to Naxos, Amorgos and all the Small Cyclades Islands – Koufonisia, Irakleia, Schoinousa and Donousa. 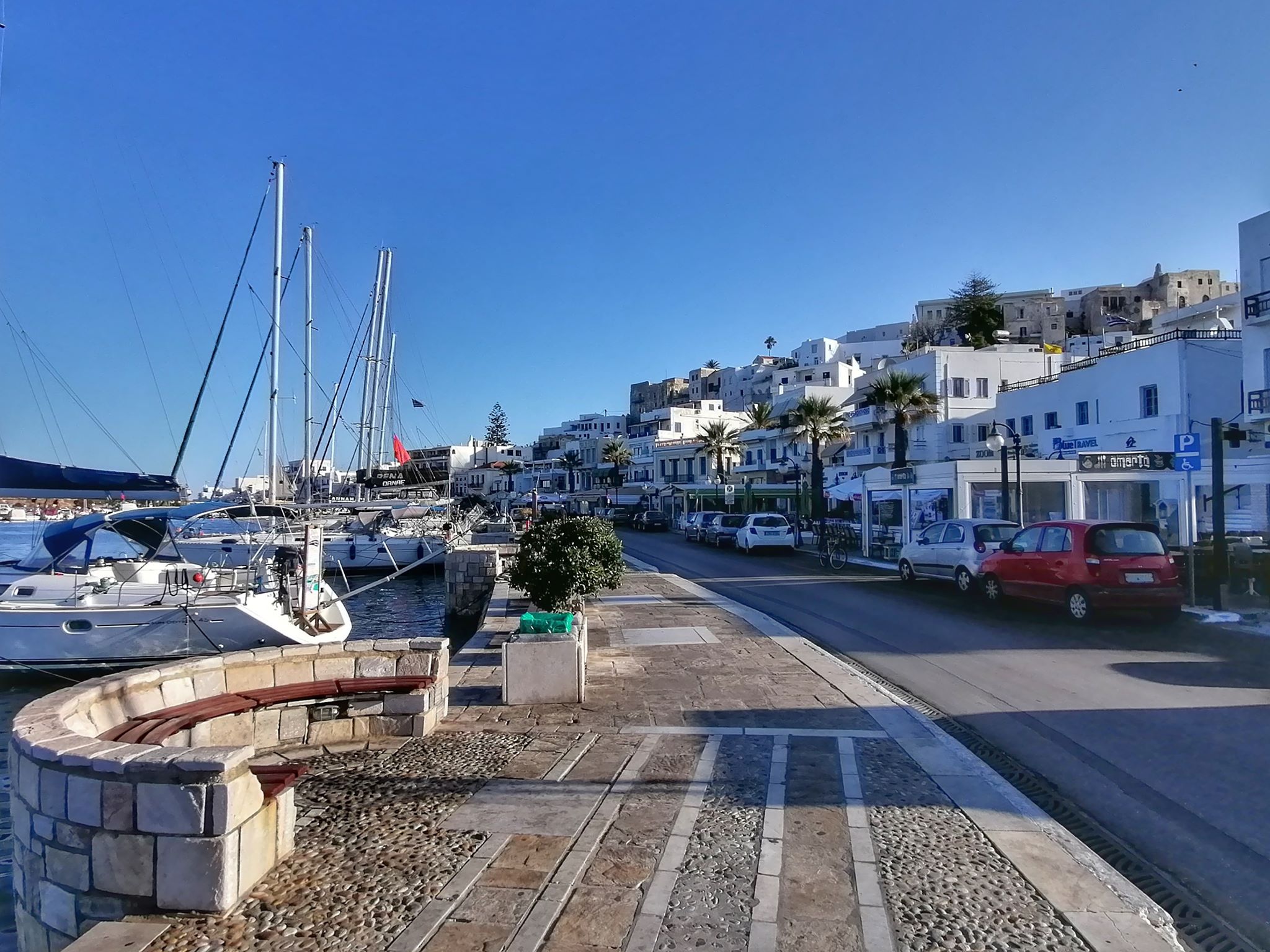 The coastal street is ideal for a walk

How to travel on the island?

The public transport is very well organized and regular, even after the high season, so we used it. The bus station in the capital city is located near the main square, just against the harbor. There you’ll find the up-to-date bus schedules. By bus you can reach many of the beaches as well as the small mountain villages on the island. The price of the one-way tickets for the closest beaches is 1,8 euro. Unlike the other Greek islands we have visited, on Naxos you have to buy your tickets in advance from the bus station and you cannot buy them from the bus driver. Of course, the most comfortable way to see the island is to rent a car. At the capital city there are many agencies offering this service and it is also possible to pay in cash and without blocking money on your credit card. 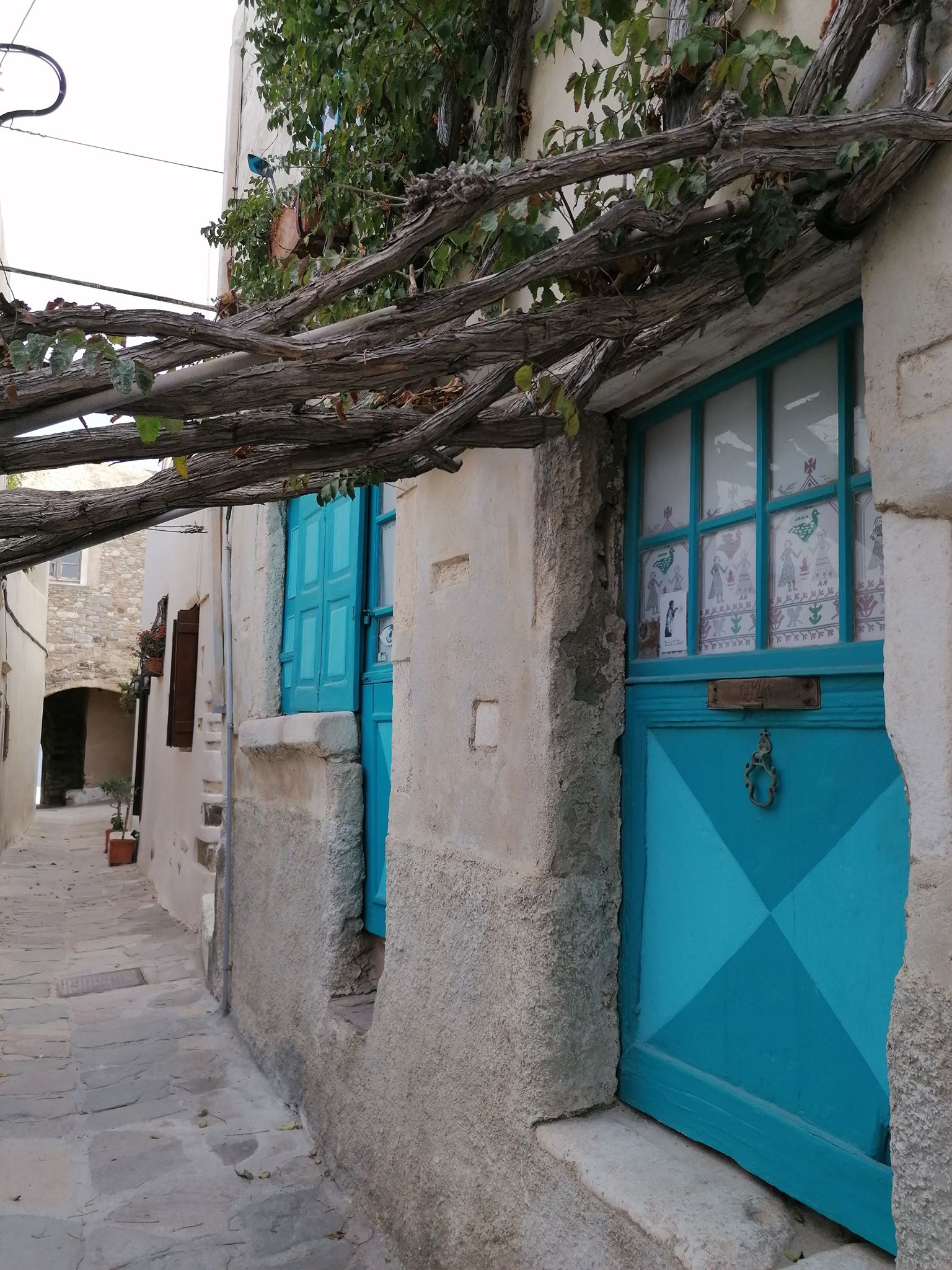 The streets of the Old Town in the morning

What you should see at Naxos?

Like the capital cities of the other Cyclades Islands, this one of Naxos is also called Hora (Χώρα / Naxos Town). It is situated on the west beach and the main harbor is there. We chose to stay at Hora and our studio was 5 minutes away from the city beach of Agios Georgios. If you come by sea, the first thing you’ll notice is the symbol of Naxos – Portara (Πορτάρα). The marble gate is 6 meters high and is a part of a temple dedicated to Apollon (530 BC) but it was never finished. It is located on the romantic island of Palatia which is connected with the town. The gate is quite impressive and is made of 3 huge marble blocks. All that is left to us is to wonder how the ancient people managed to transport them here. The walk to Palatia soon became our favorite especially at dusk when we enjoyed spectacular sunsets. No matter how long you stay at Naxos don’t miss the sunsets! From Palatia you can enjoy the beautiful view of the city and the sea underneath. And the white houses touched by the sunset rays are so lovely! 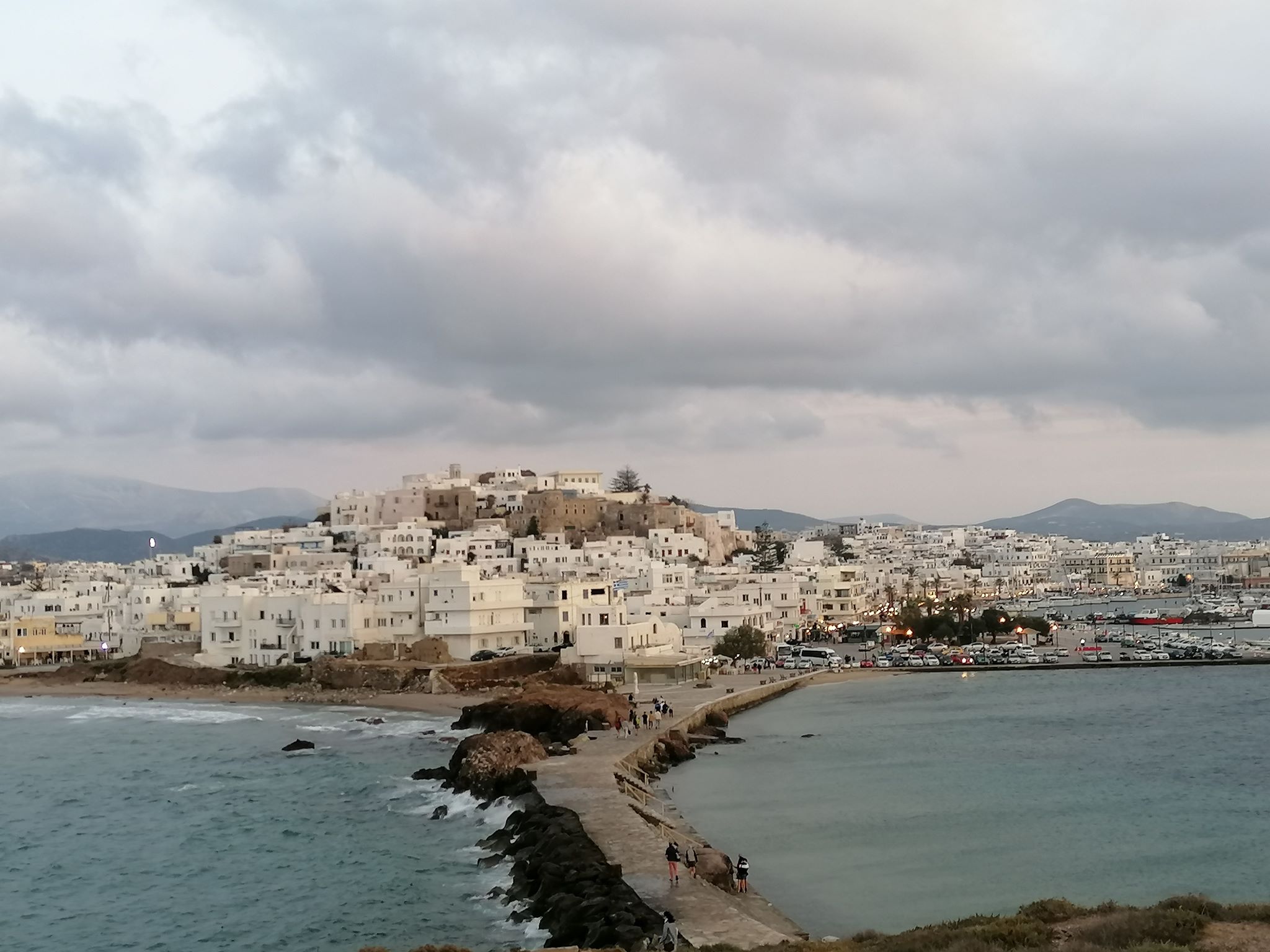 You should definitely find some time for a walk to the Old Town and get lost at the labyrinth of small streets. You will enjoy small amphitheatric houses with blue shutters, stairs, alleys, wooden arches, and, of course, a lot of flowers. You will be delighted by the small cafes with one or two tables, souvenir shops, workshops for hand-made jewelry, galleries and restaurants. Here you can also see the medieval Venetian fortress of Kastro located on a hill high above the town. It was built in 1207 by the duke of Naxos – Marco Sanudo. The facades of the once aristocratic houses form the outside fortress wall which protected the town from the attacks by sea. The symbols of the aristocrats who lived on the island can still be found and many of their heirs still live here. 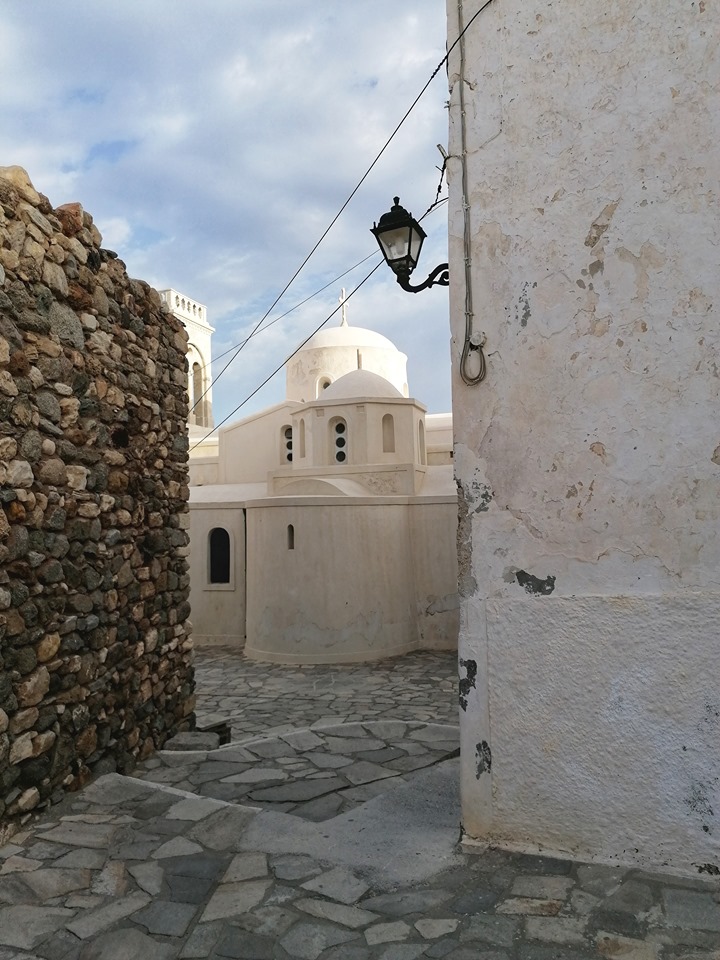 The Catholic cathedral of Kastro

Many cultural events take place in Kastro: festivals, concerts, exhibitions, performances of many artists and musicians. The Archaeological Museum located in the fortress has big collection of Cycladic marble figures and beautiful Roman mosaics. Once the building of the museum used to be a French school whose most famous student is Nikos Kazantzakis. 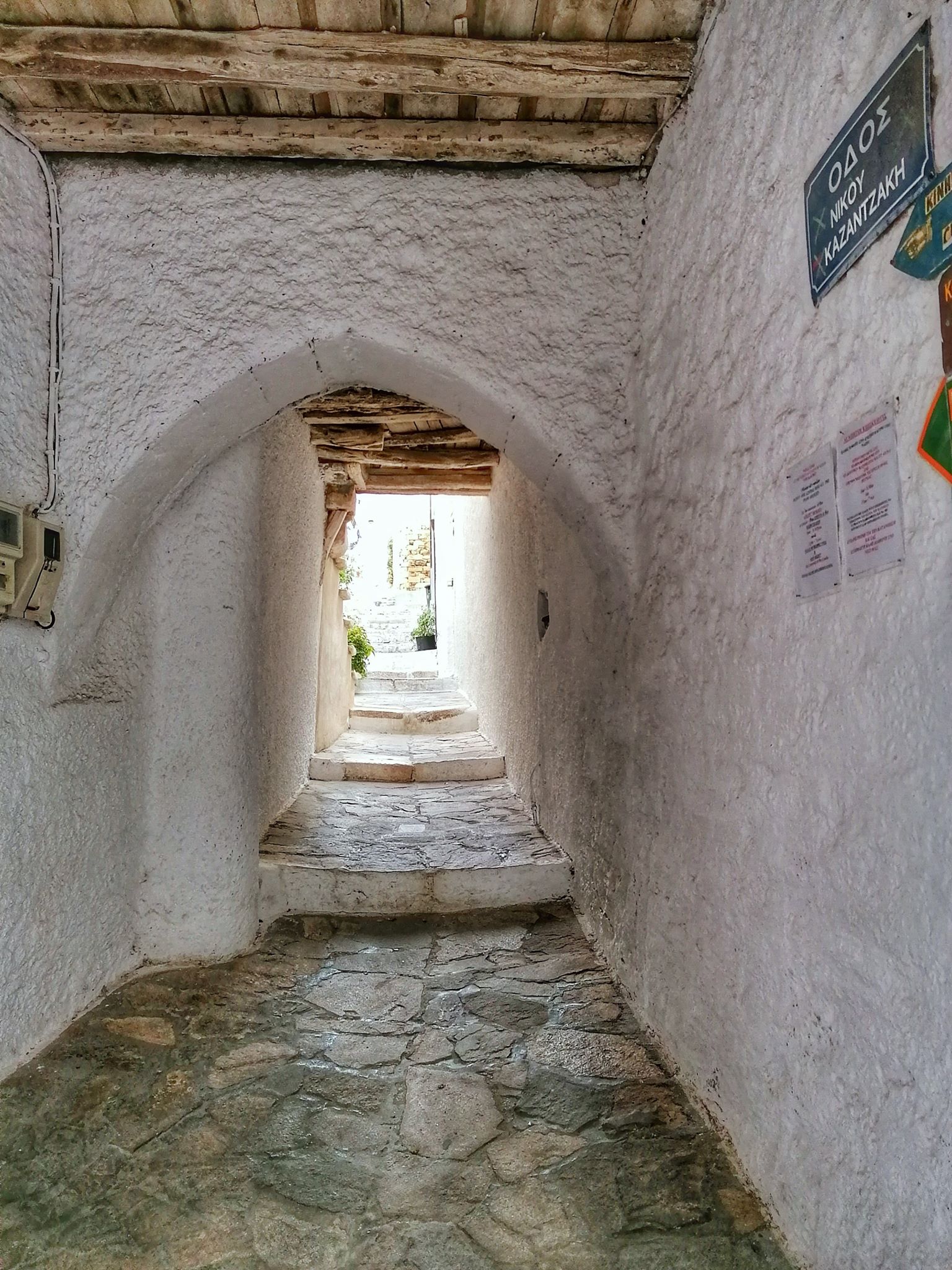 The street of Kazantzakis

The coastal street is full of life from morning till night. There are a lot of tourist offices, restaurants, cafes and fish shops. Take a seat at one of the bars and try the traditional liqueur Kitron while enjoying the sea and the white yachts. In the middle of the harbor you can see a small chapel – Panagia Myrtidiotissa. 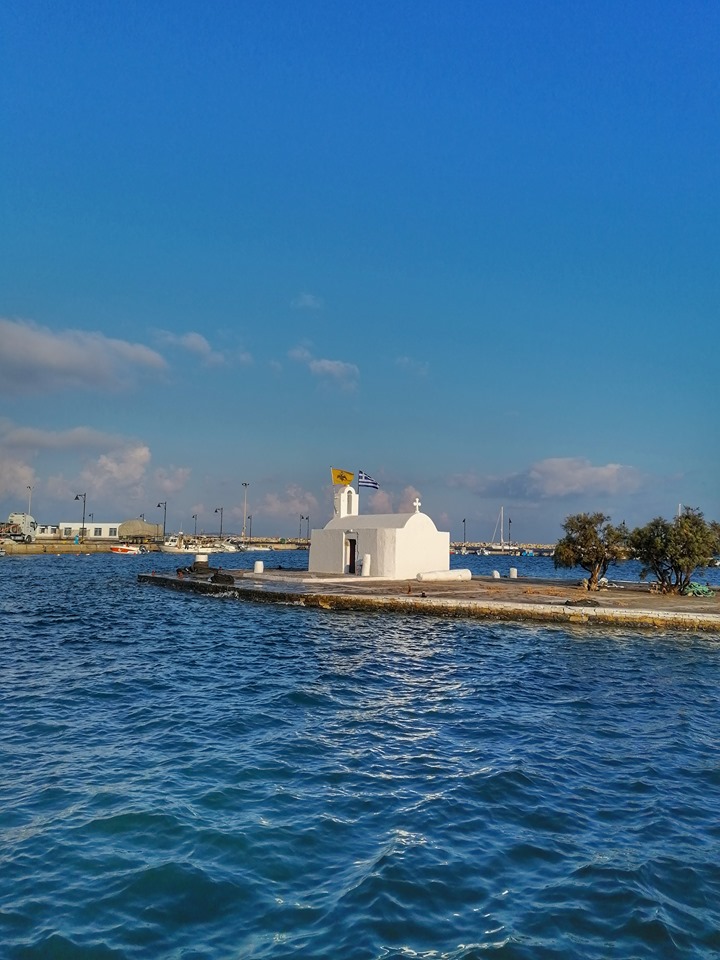 Take a walk by the sea from Portara to Agios Georgios where you’ll find the city beach with a lot of guest houses, villas, bars and clubs. 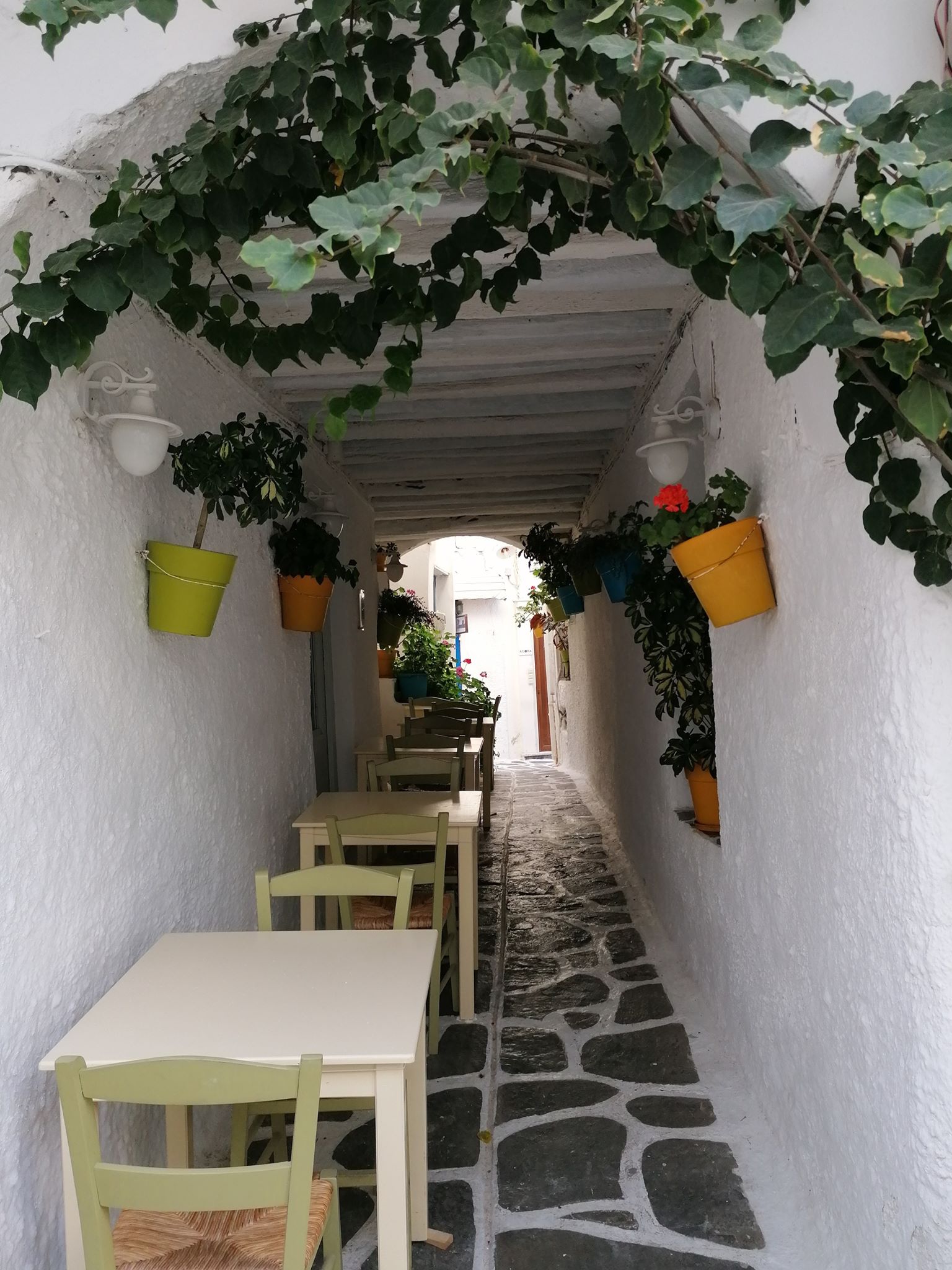 The restaurants in the Old Town

The villages, the beaches and the food of Naxos … (to be continued – click here)

Translated from Bulgarian by Dessislava Stamenova